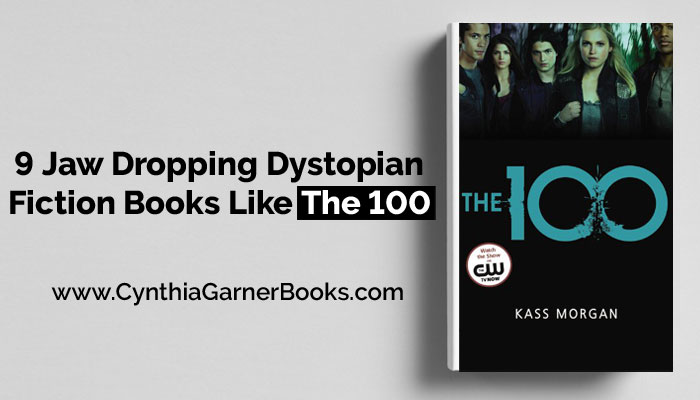 If you are a fan of dystopian and soft science fiction, then you definitely have heard about Kass Morgan’s The 100. It is a book set in a distant future where the survivors of a nuclear war live on a space station called the Ark.

The plot begins when the chancellor of the Ark decides to send 100 teenaged law breakers back to earth. The purpose of this is to check if the earth is habitable or not. Due to an improper landing, the teenagers lose communication with the space.

And now, they have to rely solely on themselves for survival. Also, they might not be the only ones living on the earth. This book is really wholesome because it is filled with morally gray characters. Plus, the world building with distinct cultures and languages is just one of a kind!

The 100 is filled with multiple conflicts and tensions that make the pursuit of human survival a questionable matter. If you are looking for books like The 100 then you will also like the following titles.

The 100 by Kass Morgan is told alternatively between the space and the ground. So, if you find stories set in space to be cool, then you will like Sanctuary as well. The most striking similarity between Sanctuary and The 100 is that both books feature a group of imprisoned teenagers.

Hence, both the books follow similar patterns. If you liked The 100 by Kass Morgan, then you should also check out Sanctuary by Caryn Lix.

A very crucial portrayal of Kass Morgan’s The 100 is the way 100 impulsive teenagers learn to survive on an abandoned planet. They do not have any help from the adults or any remotely functioning society.

Michael Grant’s Gone explores this very similar idea. The main story of Gone is that out of nowhere all the adults disappear from the world. Just like the title of the book, they are abruptly gone.

The kids they left behind have no clue what is happening to the world. And just like the 100 teenagers from Kass Morgan’s science fiction, they end up as the only living beings on the earth. Also, the setting of Gone is quite similar to The 100. These kids have no means to communicate via technology.

Other aspects of The 100 that you will find in Gone are the spread of chaos, hunger, bullies being in charge, etc. Just like Kass Morgan’s The 100, Gone will also keep you on the edge of your seat. It will make you think of what it needs to build a structured society.

Hence, if you are looking for more books similar to The 100, then you must check out Michael Grant’s Gone.

Did not get enough of the apocalyptic events of The 100? Here is the perfect substitute for you. In this collection of short stories, author Lucy Corin imagines a hundred different ways that could possibly end the world.

With some stories being a few pages and some being just a few lines, this collection will definitely keep you on the edge of your seat. Some stories show what can bring forth the actual destruction of the world. While some just focus on personal losses.

That is, the ways of the ending of the world can have multiple faces as described in history. If you liked The 100 by Kass Morgan, then you should read One Hundred Apocalypses and Other Apocalypses by Lucy Corin next.

The Diamond Age is a beautiful story telling by Neal Stephenson. This book is one of a kind because it will make you nostalgic for a place that somehow exists in the future. The stunning multi fractioned city of Shanghai resembles the action packed Arc in The 100.

Stephenson’s vivid description of the city lights and the dim valleys makes the book an adventure to read. Also the combination of futuristic technology with a Victorian society is portrayed exceptionally well.

If you liked the soft science fiction book The 100, then you will also love The Diamond Age by Neal Stephenson.

Xenocide, published in 1991, is a science fiction novel by American author Orson Scott Card. It is also the third book in the Ender’s Game series. This book is set on Lusitania where human beings, creatures called “pequeninos”, and the Hive Queen can live side by side.

However, in Lusitania also resides a deadly virus that kills everyone except the pequeninos. These creatures require the virus to mature into adulthood. However, as the majority of Lusitania is affected by the virus, they decide to destroy the place. Hence, Xenocide is inevitable.

If you liked the science fiction book The 100, then you will also love Xenocide by Orson Scott Card.

The main conflict of this novel arises when the US government is taken over by Sons of Jacob, a radical party. They destroy the previous constitution, and establish dictatorship through the Republic of Gilead.

Gilead targets all its women by taking away their opportunities and careers. They cannot read a book, take jobs, or have financial strength. Moreover, fertile women are taken into custody by powerful men to bear children for them. That is, rape cultural becomes absolutely normal.

As it is a speculative fiction, Atwood claims that such practices have already taken place somewhere in the real world. Hence, it is truly an eerie tale by one of the greatest 20th century writers. It is most definitely a perfect read if you are looking for more dystopian books like The 100.

Since you are looking for more dystopian books like The 100 with few supernatural aspects, then The Power by Naomi Alderman can be an intriguing option. This story puts women at a powerful position where they can radiate electricity through their fingers. And this makes them the dominant gender in the world.

With this placing of women, however, Alderman does not necessarily try to show girl power. Rather, her true focus comes on showing the cruelty of abuse and female subjugation. With its powerful portrayal of dystopia, this book also found a place in Barack Obama’s book recommendation in 2016.

Hence, if you are looking for a good dystopian novel like The 100, then The Power by Naomi Alderman is highly recommended.

The 100 is an exceptional series of sci-fi books that will make you question the ethical aspect of human survival. If you liked that part of The 100 then you will also like Thunderhead by Neal Shusterman.

Shusterman is a great author whose expertise lies in creating stories that questions morality. Thunderhead is a brilliant example of it. This story takes place in a land where man has control over natural death.

Hence, to maintain control over the population, there are Scythes who are government approved murderers.

This story will have you pondering about death and its impact on our lives. Hence, if you are looking for books similar to The 100, then you should check out Thunderhead by Neal Shusterman.

A plot that revolves around two characters that have polar opposite styles to each other is always interesting. It is because they create a lurking tension in the plot that is satisfying to read. While we can see it in The 100, Aurora Rising by Kristoff and Kauffman portrays this trope brilliantly too.

Just like The 100, it is set in a distant future where the year is 2380. It follows the recent graduate Tyler who is looking to create a group of his own. However, he ends up with a bunch of people that no one picked. And a girl whom he rescued from cryo-sleep (an idea that is also found in The 100).

In the end, the plot triggered by the conflicts, lead up to a situation where Tyler and his left out squad need to save the universe, like Clarke and Bellamy. Hence, if you are looking for books similar to The 100, then you should check out this book too.

Change is a scary concept for human beings. And dystopian novels like The 100 help us understand why we are so afraid of it. Even if fictional, reading soft science fictions or nanopunk can prove to be really pivotal for the betterment of the world.

That is because, they will show us several possibilities of ways that could harm our world. Hence, reading books like The 100 is highly recommended as they all talk about situations that could harm our current discipline. So, if you liked The 100 you will also like books from the list.