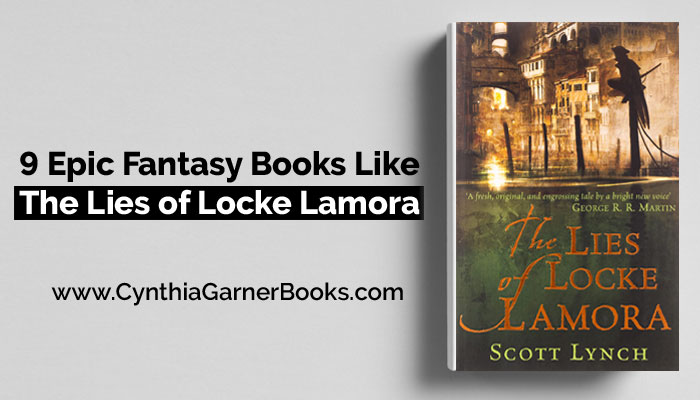 The Lies of Locke Lamora is Scott Lynch’s famous fantasy novel. It is also the first book of Lynch’s “Gentleman Bastard” series. On the outer surface, this book seems to be a story of a heist or con. But, at its heart it’s about friendship and brotherhood.

This novel also beautifully portrays the “I choose my own family” trope – which can be seen through Locke and his gang of misfits. The world-building also created a foundation to a much richer world for the readers.

The City of Camorr is a look alike to Venice, except it has sharks and mischief lurking everywhere. If you are looking for similar books like The Lies of Locke Lamora, then you should definitely check this one out.

8 Epic Fantasy Books Like The Lies of Locke Lamora

From the writing, world building, to the character development – Best Served Cold by Joe Abercrombie is similar to Locke Lamora in many ways. One of its unique aspects is the storytelling, where Abercrombie links several plots together smoothly.

The main theme of the story is vengeance. Our main character wishes to gather her own crew that will help her get the revenge she seeks. The way this squad gathers and the dynamics between them is stunningly described by Abercrombie.

The other characters were also portrayed with unique individual features. One of them had a bizarre obsession with numbers and counting. Another one had a drinking problem, one was obsessed with poisoning people, while another character is just trying to be a better version of himself.

The humor presented in the story also strikes out as most of the characters are morally gray. The world building includes dark elements like poverty, injustice, and betrayal. Also, the location of the book takes place in multiple cities. Hence, if you are looking for books similar to The Lies of Locke Lamora, then check out Best Served Cold.

In my reading journey, I have read several dark fantasies with anti-heroes. However, I have not read any fantasy darker than Lawrence’s Prince of Thorns. The main protagonist of this book is just thirteen years old. But that definitely does not mean that this book is for children!

Thirteen years old Jorg is a leader of a gang of marauders. He has killed more men than professional warriors of his city. Among the men he has killed, there were innocent civilians and his own followers.

It takes a huge amount of trauma that leads an innocent child to become this ruthless. That is why, once you read this book you will still find yourself rooting for Jorg. He is the hero of the book, at the same time he is the darkest of villains.

If you are looking for The Lies of Locke Lamora read alike, definitely check Prince of Thorns out.

So now that I have read it, I totally support the hype for this book. And I also believe this is the perfect book to read if you are looking for similar books like Lies of Locke Lamora. The plot of this book is simple. The main character is having his autobiography written by a Chronicler.

Kvothe basically tells his entire life story in three days. The Name of The Wind is the first day of his story telling. This book is also a character driven book with people impacting Kvothe all his life. The story is narrated through flashbacks with a mixture of first person and third person narrative.

Kvothe is definitely a unique character. His journey is memorable, which makes this book a coming of age story. If you liked Lies of Locke Lamora, you will also like The Name of The Wind.

Filled with exceptional plot twists and great characters – The Crown Conspiracy is a great story telling by Michael J. Sullivan. It is perfect for readers who love reading high fantasies, but in a smaller package.

The characters of this book are really well done. Moreover, they work really well with each other. They stay true to themselves from the very beginning which makes it easier for us to get to know them.

The main characters are Royce and Hadrian. They like to call themselves as a couple of entrepreneurs. However, to the common people they are also known as thieves, fanatics, even assassinators.

The Crown Conspiracy is a great example of epic fantasy. If you are looking for similar books like Lies of Locke Lamora, then you should definitely check this one out.

05# The Republic of Thieves

In his book The Republic of Thieves, author Scott Lynch has used great narrative techniques that will give you the same vibe as The Lies of Locke Lamora. This fun storyline will definitely keep you hooked.

The Republic of Thieves has two story lines blended together, i.e. dual plots. Both of these story lines go perfectly with each other given how one thing reveals the other. The past and present relationship between Locke and Sabetha is a core component of this dual plot and you will love it.

So, if you are looking for more The Lies of Locke Lamora read alike, then travel along the Gentleman Bastard series and read The Republic of Thieves.

Assassin’s Apprentice is the first book in the Farseer Trilogy by Robin Hobb. The unique world that Hobb has created here is filled with slow burn actions that set the foundation of this series. Even though the book starts slowly, there are several action packed scenes that will keep you on the edges of your seats!

This book has several components of a high end fantasy novel. Such as, a young lad, his apprenticeship and training, the struggles of his life, and the complicated connection to the royal family. You can find all these in Assassin’s Apprentice.

So, if you are looking for books related to the The Lies of Locke Lamora, then definitely give Robin Hobb’s Assassin’s Apprentice a read.

If you really liked the character tropes in Lies of Locke Lamora, then you will also like the character building of We Hunt The Flame. Zafirah is a famous hunter who is pretending to be a man. The second character is called Nasir who is the prince and a ruthless assassin.

Nasir is a character who has dark hero aesthetics. He has really intense and dark childhood trauma that has made him the gloom character he is right now. On the outside, Nasir appears to be a cut throat assassin, however, the more you learn about his past, and you will understand his point of view and root for him.

Also, Zafira is the one who sees all of Nasir’s vulnerable moments and hence there are few slow burn elements as well, that will surely satisfy your reading demand. If you are looking for similar books like Lies of Locke Lamora, then you should definitely check this one out.

Due to a hidden heist and a magical conspiracy, four teens become the highlight of a secret government. Diz and her friends use their skills to hack magic from Maz Management.

As their high school is almost at end, they face their final heist – which is to uncover the real cause behind a mishap that took the lives of thousands of people. If you thought the adventures of Locke Lamora was cool, then the battle of Maz will definitely be your cup of tea.

If you are looking for similar books like Lies of Locke Lamora, then you should definitely check this one out.

Lies of Locke Lamora is definitely an impactful novel because of Scott Lynch’s stunning plot building. This whole series is one of its kinds and it is very natural to crave more of its elements. That is why this list was created to serve you more of similar moral conflict, power and corruption, characterization, and slow burn romance.

Hence, if you are looking for books like The Lies of Locke Lamora, then these books will serve you just right.